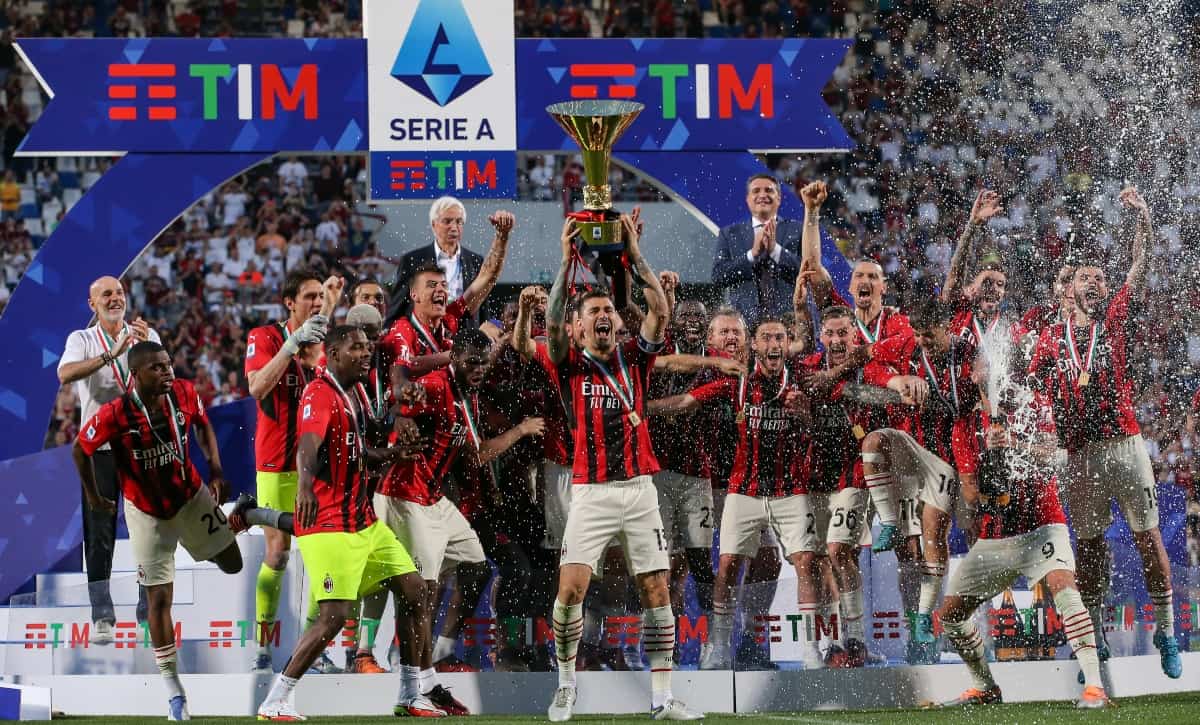 The thrilling Serie A campaign came to a slightly anticlimactic close. Milan smashed Sassuolo 3-0 in a do-or-die game. Yet, this season had no shortage of ups and downs for the Rossoneri. A well-earned summit to top Serie A yields a summer-long celebration.

Meanwhile, the club’s city rivals ponder how the title slipped out of their hands.

Coming into the season, both teams set reasonable objectives. Simply put, qualification for the UEFA Champions League is a must. Inter, the defending Serie A winners, put together a hectic transfer window in the summer of 2021. Key departures included Romelu Lukaku, Achraf Hakimi and Christian Eriksen. However, the most important asset to not return was manager Antonio Conte. His title-winning side was disbanded piece-by-piece. Consequently, title aspirations faded slightly.

On the other side of Milano, anticipation was high. In 2021/22, Milan finished second to Inter, an impressive result for a generally young side. In 2021/22, a title challenge seemed plausible.

Neither team brought in any huge name due to financial limitations. Rather, both Milan sides solidified depth and did their best to replace the moving pieces. The most controversial move of the summer was most certainly that of Hakan Çalhanoğlu. The Turkish international switched his allegiance from red to blue. Essentially, he replaced Christian Eriksen.

Serie A’s ongoing manager carousel had 11 new managers in charge at the start of the 21/22 season. New hires Maurizio Sarri and Jose Mourinho received ambitious transfer windows from the Roman clubs. It set the stage for a season to remember. Serie A did not disappoint.

Deciding the Serie A title in Milan

The start of the season was exhilarating. The Nerrazzuri thumped Genoa 4-0, with hot topic Çalhanoğlu contributing on two goals in a dream debut. All of Serie A’s top sides won in matchday one aside from Juventus, who were held to a disappointing draw. Juventus’s struggles pushed along the agenda that this season’s Serie A title was as unpredictable as possible.

Napoli, Milan and Inter were all off to strong starts. After seven matchdays, all three clubs held an undefeated record.

As European competitions kicked off, Serie A’s top sides rested key players with often-limited depth. Therefore, performances stagnated domestically. After a shock loss to Sarri’s Lazio, Inter found itself a few steps behind title challengers Napoli and Milan. Then, a heartbreaking collapse in the final minute to bitter rivals Juventus in the Derby d’Italia left the Nerazzurri even further off the pace.

Milan and Napoli continued to impress. Defensive solidity made up for the lack of goals scored by both teams. Fans highly anticipated the Derby della Madonnina  in the weeks approaching the match. Both teams looked prime to challenge for the Scudetto. Moreover, the Rossoneri was undefeated heading into the derby.

The match came off to a roaring start, with former Milan player Çalhanoğlu netting the game’s opening goal from the spot. However, Milan’s quick reply levelled the game, and Lautaro Martinez’s failure to convert from the match’s second penalty kick proved fatal. The match ended in a thrilling 1-1 draw. On one hand, Milan did well to fend off its city rivals.

However, AC Milan lost the next two of its league games to Fiorentina and Sassuolo. On the bright side for Milan supporters, Napoli’s undefeated run came to an end as well. Yet, the team to end it was Inter, which scored three unanswered to win.

After 14 matchdays, the top of the table was extremely tight. Four points separated first-place Napoli with third-place Inter. However, the start of December saw uncharacteristically strong performances from Pazza Inter. Ironically, Inter is often famous for its winter collapses. In fact, a 10-game unbeaten streak starting from their match against Juventus in mid-October saw them steamroll into top spot heading into the new year. Inter sat four points ahead of Milan and seven on top of Napoli, which dipped in December.

The Nerazzurri started 2022 just as they had left off. A key victory against Lazio had confidence at an all-time high ahead of their Supercoppa final against Juventus. The final was a thrilling affair. Alexis Sanchez came off the bench to score the winner in the match’s dying embers.

Life for Inter seemed magical at the time. At the end of January, Inter held a 4-point lead over both Milan and Napoli. However, Inter’s magical run came to an abrupt halt in February.

The first match in February was the much-anticipated Derby della Madonnina. A win for Milan would close the gap with its rivals to just one point.

A tense affair, the match entered half time with Inter leading courtesy of an Ivan Perišić finish. However, quick goals from Olivier Giroud inspired the Rossoneri to a dream comeback victory in the derby.

The win secured head-to-head advantage over Inter. Then, a draw between Inter and Napoli the following week shot Milan to the top of Serie A.

Liverpool knocked out Inter Milan from the UEFA Champions League in a cagey two legs. Now, Inter had full focus on domestic competition. Yet, goalscoring struggles loomed large. Inter picked up two draws on the bounce against midtable opponents Torino and Fiorentina. Meanwhile, Napoli and Milan continued their winning ways and extended the lead at the top.

After 19 matches, Inter sat nine points adrift of the title challengers. A crucial Derby d’Italia against Juventus could have ended all of Inter’s hopes. However, a spot-kick goal from Çalhanoğlu provided the difference as the San Siro side held off Juventus. Also, Milan drewback-to-back games, and Inter was right back in the title fold. 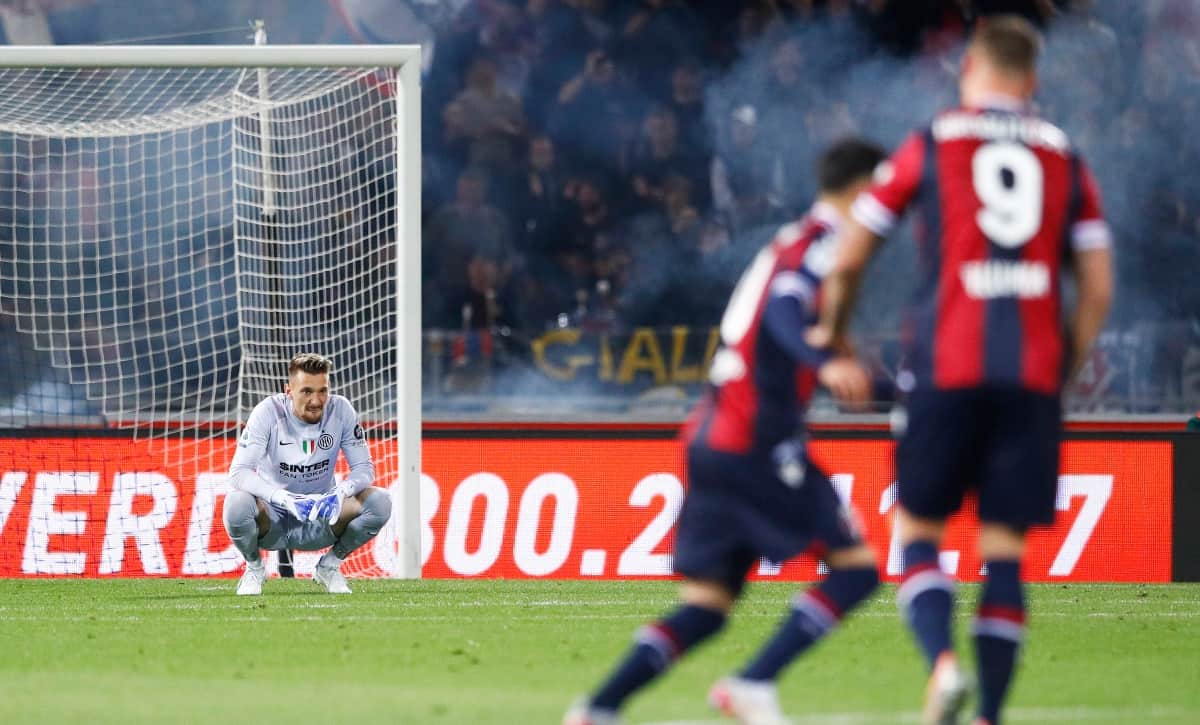 Shock defeat for the defending champions

Midweek, Inter had the opportunity to close the gap at the top. Inter faced Bologna in a match postponed since December. Many ticked off the game as a certain victory for Inter. The Nerazzurri travelled to Bologna with the Serie A title in their sights.

The match came off to a dream start. Ivan Perišić scored a beautiful goal in the opening minutes. However, a quick response from former Inter player Marko Arnautović levelled the game heading into the second half. Inter struggled to finish their chances, and the game remained level for much of the second half. With 10 minutes remaining, disaster struck. Deputy goalkeeper Ionuț Radu miscontrolled a back pass, and Nicola Sansone jumped on the loose ball. Sansone hammered home a shock goal for Sinisa Mihajlović’s men.

Inter failed to come up with a response. In the end, Simone Inzaghi’s side suffered a bitter defeat, and the Scudetto slipped from Inter’s grasp. Later, Rafael Leão slotted home the game winner for Milan to snatch a key victory against La Viola.

Milan claims the Serie A title

With just 3 matches to go, Milan needed 7 points to win the Scudetto for the first time in over a decade. However, this was no easy task. The club’s remaining matches featured Hellas Verona, Atalanta and Sassuolo. Few consider these fixtures pushovers by any stretch of the word.

The following matchday, Inter kept its last hopes alive with four unanswered goals to come back against Empoli, 4-2. However, the result did not faze Milan. A 3-1 victory away to Hellas Verona put AC Milan even closer to the Scudetto. Compounding the anticipation, Milan comfortably cast aside Atalanta. The pair of victories meant the club needed just one point in the final game of the season to secure its 19th Serie A title.

The only problem, the final match was against Sassuolo – a team that had defeated them 3-1 in the reverse fixture. Led by boyhood Inter supporters Domenico Berardi and Giacomo Raspadori, Sassuolo looked set to put up a fight against the Rossoneri. With anticipation heating up throughout the week, tension reached a boiling point ahead of the opening whistle. Milan started ferociously from the first minute and rampaged the Neroverdi goal. Olivier Giroud found the icebreaker inside 17 minutes. The Frenchman doubled the advantage just 15 minutes later. At halftime, the lead ballooned to three with Franck Kessie all but securing the Scudetto for Milan. Inter’s win in the final matchday was now a moot point.

A hard-fought season had come to a close. Finally, the Rossoneri celebrated a historic victory. Milan lifted the Scudetto for the first time in over a decade. Milan fans filled the streets while Inter supporters were left heartbroken after such a competitive campaign. Looking forward to the 22/23 season, Milan teams return to fight for the Serie A title.

However, this summer determines whether Allegri’s Juventus side or Spalletti’s Napoli can join the title fight. Regardless, congratulations are in order to Rossoneri fans on a well-fought season. Consequently, commiserations go to Inter. The club had it all in its hands, only to watch it crumble.

3 days ago FootLiveScores
We use cookies on our website to give you the most relevant experience by remembering your preferences and repeat visits. By clicking “Accept”, you consent to the use of ALL the cookies.
Do not sell my personal information.
Cookie SettingsAccept
Manage consent